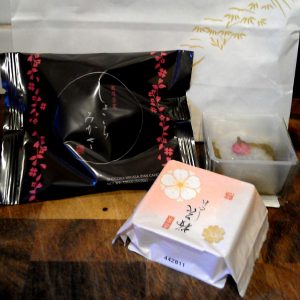 Minamoto Kitchoan is a small shop in Piccadilly that is exclusively dedicated to Japanese sweets. Japanese sweets are not the hard boiled and gummies candies that Westerners are used to, but small cake type products called wagashi, often with flavoured fillings and decorated to look pretty. There are eleven Minamoto stores worldwide, with just the one in England. Other locations include New York, Hong Kong and of course, Japan.

I was intrigued to see the shop and try some of the wagashi as having flirted with various oriental sweets and cakes in the past, I has always found that to my Western palate most of them were decidedly odd tasting and really only had novelty value for me.

Minamoto Kitchoan is truly is the most stunning shop I have ever seen. From the colourful window displays, counters full of beautiful pastel coloured wagashi and the dinky little packages that they all come in, to the little descriptions telling you exactly what everything is and the immaculately turned out staff who are very quick to help with a purchase and make recommendations, this is a must for anyone who, like me, loves all things Japanese.

Going into the shop reminds me of when I was in China, that I didn’t know where to look as everywhere I went everything was so interesting! I still get that feeling whenever I go into the big Chinese supermarkets in Chinatown.

It is a nice touch that everything is not only described in full with tickets but that each display of sweets has one unwrapped so you can see exactly what you are getting inside. This is very useful when you don’t have a clue what a lot of the products are from the packaging! 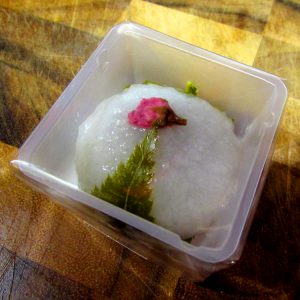 The sakuramochi was the first of the three that I tried and the most recognisable to me. Mochi are now quite widely available in Japanese restaurants and oriental supermarkets, so I already know what they taste like. The sakuramochi was wrapped in a salted cherry leaf and topped with a pretty pink cherry flower. It had the plainest packaging of the three, wrapped simply in cellophane. The label described it as a rice cake, meaning it was made from glutinous shaped rice and filled with a sweet red bean filling. On opening it up, I found it extremely sticky and cutting it in half for the purposes of photographing it was extremely difficult. It tasted very much like a normal mochi but the saltiness of the leaf and flower were decidedly strange. In fact, I think it really detracted from the rest of the sweet, as a strange combination of sweet and salty was really unpleasant. A shame as the red bean filling itself was quite nice. This is not one I would recommend! 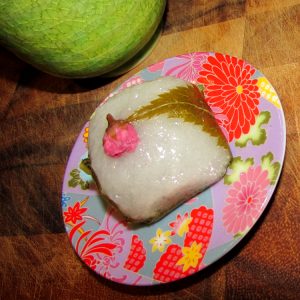 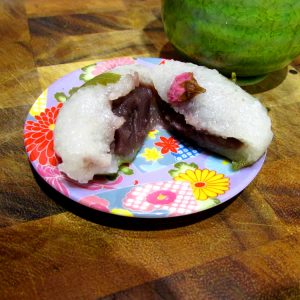 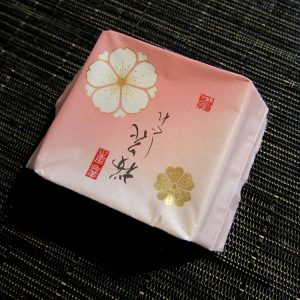 The okashigure I had to buy because its packaging was so pretty. It makes me think of Spring with its ombre pink pastel with white and gold flowers printed on. The label tells me it is a bean cake and a quick look at the ingredients shows it is made from kidney beans. Inside, like its packaging, it is white with a pale pink leaf on the top. It has a slightly cracked appearance and is not sticky like the sakuramochi was. The texture is difficult to describe; it is soft and kind of fluffy, but very pleasant to eat. It has a slightly sweet flavour but nothing overpowering. It has a pale pink middle, that seems to be there for decorative purposes as it didn’t taste any different to the outside. It was very pleasant to eat and I imagine would be perfect with a cup of green tea after a Japanese meal. 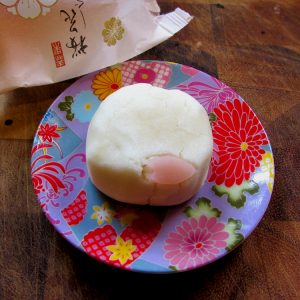 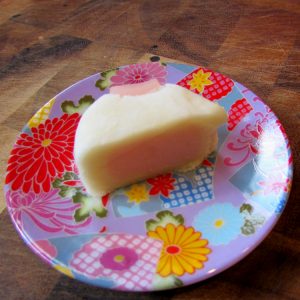 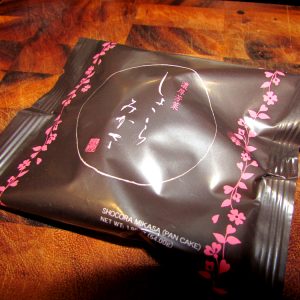 I bought the chocolat mikasa because of the three I thought that a chocolate flavoured wagashi was probably most likely to appeal to me, as I like chocolate almost as much as ramen. The packaging promises a pan cake and upon unwrapping it, it does indeed look like two chocolate pancakes stuck together with a chocolately filling. It has a definitely cakey texture- completely different to the other two items I bought. The cake is light and fluffy and with a nice chocolate flavour. The filling is amazing; it tastes like a lighter version of Nutella and combined with the delicate flavour of the cakes either side of it, makes for a really tasty cake. This was by far my favourite out of the three, but I would definitely buy the mikasa and okashigure again. But it has also encouraged me to head back to Minamoto in the near future to try more of their unusual and tasty sweets. 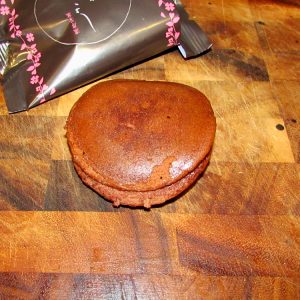