I received the Nanban cookery book by Masterchef winner, Tim Anderson, for my birthday last year, a gift from my brother. The recipes are described as ‘Japanese Soul Food’ and the book covers a broad spectrum of Japanese and East-meets-West recipes, with a whole chapter on ramen. Tim Anderson has a restaurant of the same name in Brixton which I haven’t yet had a chance to visit but it is definitely on my to-visit list! 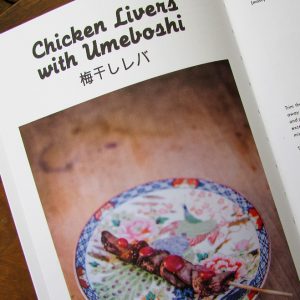 Despite cooking being a big passion of mine, I’m not a massive fan of watching cooking on TV, so I have never watched Masterchef. I can say, however, that Tim Anderson’s book is both amazing as a coffee table book, as well as for cooking the actual recipes. There are two recipes in particular that I have been desperate to try ever since I got this book and this week I decided to actually try the recipes out.

The first recipe is chicken livers with umeboshi, a Japanese pickled paste made with under-ripe apricots, but often known as pickled plums. I had never tried umeboshi, but reading about it in the book made me really want to try this dish, combining the deep earthy flavour of the livers with the super salty sour tang of the pickle. Whenever we eat chicken livers my husband devils them, so sliding them onto skewers and grilling them after marinating was a completely different way to cook them for me. 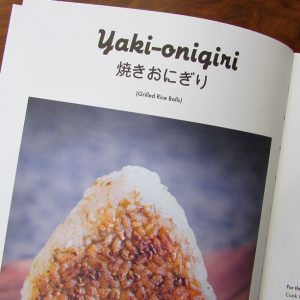 The second recipe is the yaki-onigiri. Most people have seen pictures of Japanese onigiri, cooked rice balls compressed into triangular shapes with a rectangle of nori wrapped around them. This recipe appealed to me just to try something so quintessentially Japanese. There are various fillings that the book suggests, the traditional being umeboshi again but with this being the main flavour in my chicken livers, I decided instead to fill them with kimchi, a Korean pickled cabbage made with Chinese leaf that is used in Japanese cuisine as well.

I marinated the chicken livers in the morning, so they had a good 10 hours for the flavours to infuse. The marinade smelt amazing; with sesame oil, garlic and ginger, it had a wonderfully oriental aroma. I was a little sceptical of grilling liver, which I thought might go tough, but the marinade helped keep them moist and succulent. 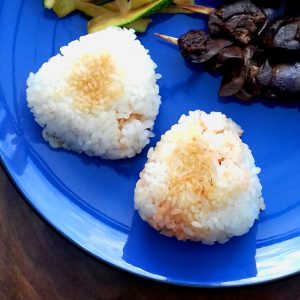 The onigiri was trickier. I followed Tim Anderson’s recipe for the sushi rice, which made the most perfect sushi rice I have cooked (I am more familiar with cooking jasmine and basmati rice and have always been a little scared of sushi rice and its more complicated cooking process!). After leaving the rice to cool, I tried to make my triangle shaped onigiri and stuff them with kimchi. I used a shop bought jar of kimchi by one of my favourite Japanese brands, Yutaka (the book does have a recipe for homemade kimchi, but I didn’t have time to try this on this day- will do soon!). I really struggled with forming the shapes, as even with the suggested salt water on my hands, the rice kept sticking to me and as soon as I tried to add even the tiniest amount of kimchi, the juice from it made the onigiri fall apart. I ended up squeezing as much juice out of the kimchi between my fingers before added it to the middle of the rice, but they still tried to fall apart. I was convinced that because of this they would not hold their shape when frying, but amazingly they pretty much did. I wasn’t going to try my luck, however, and so did not cook them too much just in case, hence why they are not really golden brown on the sides- they did go nice and crispy with the buttery glaze though!

So how did they taste? The chicken livers certainly had a sour tang from the umeboshi. I think perhaps the amount listed in the recipe for the particular Clearspring umeboshi paste I used (the recipe asked for 1 tablespoon) could have been reduced and for my Western palate, serving it with more umeboshi on the side was definitely overkill with the already strong flavour of the liver itself. If I was to do this recipe again I might instead make a soy based glaze or sauce to drizzle over the liver skewers, to soften the flavours a little for me.

The onigiri, despite how fiddly it was- and you can see in my pictures they are still far from perfect- tasted great. I felt they could have done with a little more filling, as the book gave no direction for the amount and anymore was only causing them to call apart, but they did taste really good. Where the rice had gone crispy from the buttery glaze, it had a really great umami flavour and the simplicity of the rice against the sharpness of the kimchi worked well. 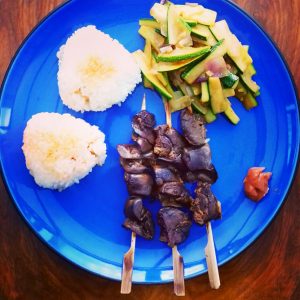 Overall, the recipes on the whole were relatively easy to follow. I struggled most with my lack of experience in cooking certain Japanese foods and unfamiliarity with certain ingredients. With many recipes I haven’t tried I can adapt it to suit my tastes, knowing what additions or exclusions will do to the end dish.

This book is definitely not for the inexperienced cook and you have to think a lot about what you are doing and follow the methods carefully- so it not one to produce a quick, simple dish after work. That is not to detract from the book at all; it is a fantastic book and I enjoyed the meal I created from it. I am keen at some point to try some of the ramen recipes and would weirdly like to try Kurume ramen stock, made with pig trotters and half a pig skull (yep, really!), but this book remains one of my favourites for the gorgeous pictures and fantastically passionate writings of a chef who truly loves what he cooks.