The Mid-Autumn (or Mooncake) Festival is celebrated mainly in China to celebrate families coming together to celebrate the year’s harvest and also to offer prayers for the family, such as for longevity and conception. Mooncakes are traditionally given out between families during the festival and are traditionally pastry filled with bean paste and sometimes salted egg yolks.

When we visited China in 2013, it was this time of year and the shops were filled with pretty decorative boxes of mooncakes. I had no idea what they were or whether they were savoury or sweet- and I didn’t get a chance to try them over there- but since I have been keen to try these traditional Chinese sweets.

This weekend in Sussex where we live it is the start of the bonfire season, where celebrations are held around the county with fireworks and torchlight processions and it is also traditionally the time of harvest festivals, so it seemed appropriate to write this review now.

When I heard that Minamoto Kitchoan was producing their own mooncakes, I had to try them. Not only did they come in pretty Japanese gift packaging, but they were also available in four flavours, including green tea and earl grey. My husband happens to work very close to Minamoto in Piccadilly, so I was able to send him to get me a box.

The mooncakes come in a square purple box, like a selection box of chocolates, with a gold insert and four individually wrapped mooncakes in different colours, wrapped with pretty red and gold patterned wrappers. Three of the mooncakes look like traditional Japanese wagashi and I imagine are more of Minamoto’s Japanese take on a traditional pastry mooncake. The third looks more traditional, with a thicker pastry outer, which looks like it has been baked and glazed on top. All four are bean cakes, made with a filling of mashed sweetened kidney beans, which is a familiar theme with the wagashi I have tried. 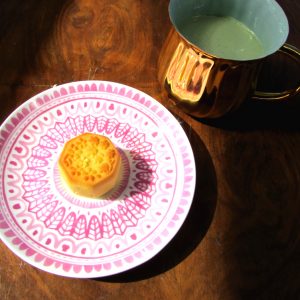 The white peach mooncake is a pale peachy-yellow colour and a delicate pink inside. The texture to me is very similar to Minamoto’s okashigure, which I bought the last time I was there. It is soft and light and like most oriental sweet items, nowhere near the sweetness that we are used to in the West. The peach flavour is delicate and pleasant, a light fruity and almost floral flavour.

I was really looking forward to the earl grey mooncake as I love earl grey tea, which is black tea flavoured with bergamot. Looking at the ingredients it looks like the earl grey flavour is from powdered earl grey tea. It is the prettiest pink with a light brown colour inside. I was a little disappointed in this one because the flavour was extremely delicate and had I not known what flavour it was, I don’t think I would have recognised it as earl grey, despite my love of this tea. 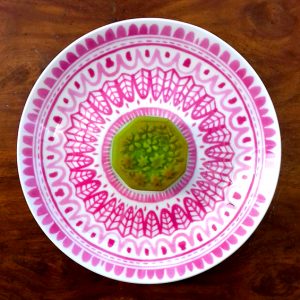 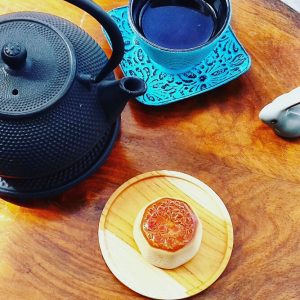 The fruits and nuts mooncake was probably the one I looked forward to the least. I’ve never been a major fan of raisins and fruit in cakes, scones and breads. This mooncake has a different pastry outer to the others and has a glazed browned top, looking like it was baked. The pastry was like soft and light; I had been expecting more of a heavy pastry similar to a shortcrust. The middle, with its kidney bean filling was mixed with candied peel, raisins and cherries, as well as chopped walnuts. The flavour reminded me of a Christmas mince pie. I was surprised to find that with its fruity and nutty filling, this was by far my favourite of the four mooncakes. 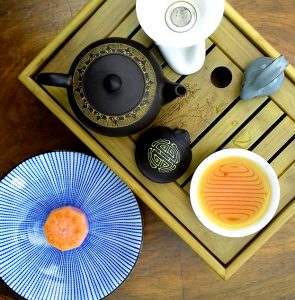 I love Minamoto Kitchoan products for two reasons. Because I love really quintessentially Chinese and Japanese things, the pretty oriental packaging and stunning looking sweets are an immediate drawer to me. However, I also love the products themselves with their pretty patterns, delicate authentic flavours and traditional ingredients- like having a little slice of Japan on Piccadilly in London. I’m really pleased that Minamoto brought out these mooncakes so I finally got to try them and join in the Mid-Autumn festival celebrations and I highly recommend them to anyone wanting to try them- you won’t be disappointed!

Minamoto’s mooncakes are available in boxes of 4, 8 or 12 and priced from £12.00. Should you wish to try them, they are available to order via e-mail. Find their details on their facebook page.